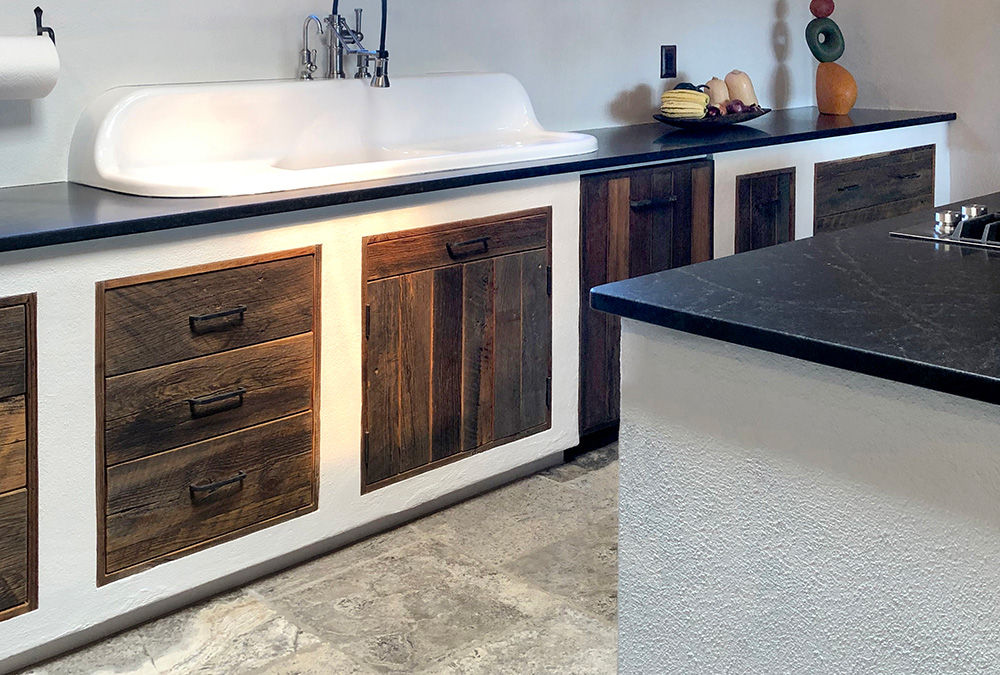 Two artists, both with a love of found objects – made their way from Texas to Santa Fe a few years back.  With them were a couple of dogs, some horses, and a curious collection of treasures – items plucked from dumpsters, antiques from obscure flea markets and a few tree stumps.  The couple came across a beautifully sighted home overlooking the Galisteo basin and out to the Ortiz Mountains. They decided this was the place for them to plant roots.  A half century old, antiquated, cramped double adobe home became a new palate for their art.  It was the perfect place for the couple to begin the Santa Fe chapter of their story.

Over the next couple of  years, the creative couple set about transforming the home – mostly with their own hands and using the found objects and treasures they had saved throughout the years, as well as items newly found in Santa Fe.  Even with a limited budget, little by little the house began to transform, room by room. An old beam found on the property, sanded to just the right color and texture was added to the bathroom. Gifted antique mesquite ox-yoke tables became bathroom vanities. Large South Texas cedar planks became desks. An old Texas dance hall urinal became a bathroom sink and a rusted piece of metal with perfect round holes became a courtyard gate. As the rest of the house began to take shape, their focus turned to the kitchen.

For the kitchen the couple wanted something different. Their dream was to maintain the aesthetic that they were creating in their home with a kitchen that would complement their beloved found objects and antique treasures. Being on their route home, they had seen La Puerta Originals, but were convinced they could not afford what was inside. Nevertheless, after driving by, day after day, they decided to stop in.

For their first meeting with Scott, they brought several photos of kitchens with the aesthetic they were seeking (always a great idea!), as well as a wabi-sabi quote. For those of you not familiar, the concept of wabi-sabi arose in 15th century Japan in reaction to lavishness and perfection sought at the time. And while no easy translation exists, it is essentially about finding beauty in nature and imperfection, while celebrating the cycle of life and the eventual return of everything to the earth.

Touring the grounds, shops and the library of past work, the clients felt an affinity for the rustic pieces, the distressed patinas and Scott’s appreciation of antiques, woods and repurposing efforts. They found that the budget was doable, and the clients got to work with Scott on plans for their kitchen.

Rather than stand-alone cabinetry, the clients wanted rustic wood cabinets set into plaster walls. The cabinets would be built as solid boxes that would be inserted into the walls and kitchen island. From our antiques yard they chose weathered fencing for some of the pantry, cabinet and drawer fronts, which was augmented with antique planking and woods from the yard.

A few special features were added, such as the wood paneled refrigerator and dishwasher, the pull-out pantry cabinet next to the fridge and an appliance garage with an easy gliding swing up door directly over the sink wall counter, all shown in photos here. Not shown are the tilting hidden sponge drawer in front of the sink and the pull-out garbage/recycle drawer among the sink wall cabinets.

The clients love their new kitchen. With the cooktop venting out under the island, there was no need for a hanging stove hood, so the room is light and airy. The white plaster highlights the rustic wood cabinet and drawer fronts, while the simple but weighty hardware embellishes without distraction.

We produce kitchen cabinetry in many styles. To see more of our innovative cabinetry, please see the gallery section of our website. Feel free to contact us to see how we can build a La PuertaOriginals’ kitchen for you!